The Board of Directors identified work around Diversity, Equity, Inclusion, and Justice (DEIJ) as one of the key initiatives for SDI as an organization moving forward.  To be clear, we feel this work is of paramount importance in all the regions and geographic areas of SDI, as it reflects a  broad invitation into the SDI Community, regardless of religious or spiritual background, ethnicity, gender identity, nationality, and other affiliations.  We also want to note that is of special importance to us to hold up the indigenous communities on whose land we all live.  And finally, we want to center our work internationally to tackle anti-racism, anti-discrimination, fairness, equity and justice everywhere, regardless of the particular terms employed and aware of the uniqueness of cultural contexts in which such efforts are undertaken.

Here are some of the initiatives SDI has initiated over the last two years around DEIJ:

And here are some of the DEIJ plans and collective discernments we are envisioning for the future:

The SDI Board is hosting two informal peer gatherings on February 15th. All SDI Members are invited to bring your tea or coffee and catch up with SDI Board Members on all things related to spiritual direction and companionship. 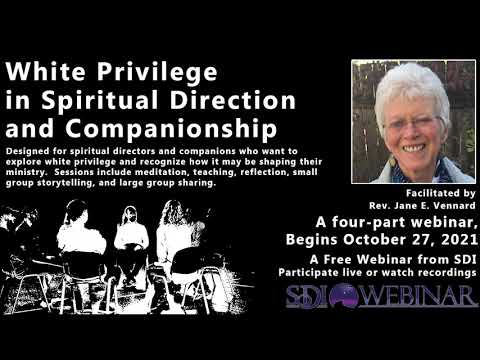 Designed for spiritual directors and companions who want to explore white privilege and recognize how it may be shaping their ministry.

This self-paced webinar series hosted by Rev. Jane Vennard is available for free to all SDI members.